Monday-Friday 9am-5pm Facebook Twitter 08000306838 sales@serverroomenvironments.co.uk
SRE uses cookies to improve the usability of this website. By continuing to use this site you are accepting the use of these cookies.
Find out more / Accept this notification X
We use cookies to ensure you get the best experience on our website.
More Info / Accept X
Home > Blog > The Future for Datacentre and Server Backup Power Solutions 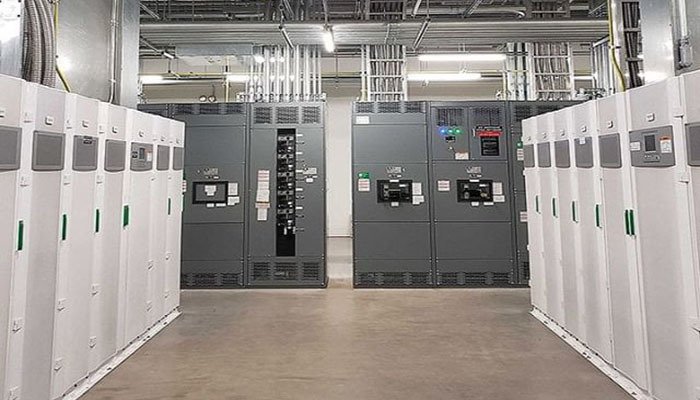 The UPS system or uninterruptible power supply that we know today evolved from the oil industry and its need for backup power protection for computer operations in the 1960s. Today’s UPS systems provide a similar solution, but the world of backup power has changed dramatically since that period driven by a host of factors and technological developments.

Datacentres provide a managed and secure environment in which to run IT servers. Datacentres can be classified as enterprise or co-location. Enterprise datacentres are own, managed and operated by and for the use of a single organisation. Co-location or Colo datacentres rent out space, racks and servers to their clients.

Virtualisation and Cloud computing continue to fuel datacentre market development as does the need for greater storage of information and its analysis. Whether the data is captured through Industry 4.0 or Internet of Things (IoT) applications, CCTV and access control security systems, general office applications or social media, it must be stored somewhere and with facilities that provide 24/7 coverage and immediate access.

Datacentre electricity usage is a growing concern for many operators and the countries they operate within. There is a continual drive to improve energy efficiency and reduce the demands placed on national grids by these large power generation users.

UPS manufacturers have continued to evolve their backup power technologies to meet the demands principally of the datacentre operators. UPS systems continue to push the boundaries of what can be achieved in terms of energy efficiency, compactness and modularity. Many UPS manufacturers can now achieve operating efficiencies of greater than 96.5% in full on-line operating mode with 97% close to becoming the next standard benchmark. 99% is also possible for systems that can run in full eco-mode. Modular UPS systems, once a niche product and now growing in popularity thanks to opportunities they provide for right-sizing and scalability in an UPS architecture that can grow both vertically and horizontally.

Generators are often deployed alongside UPS systems in datacentre environments. In applications like this, the UPS provides protection when mains power is present, and a backup battery set to power through small power outages or at least until the standby power generator power up to speed. Generator manufacturers are evolving their backup power sets to become more environmentally friendly in terms of emissions (fumes and noise), efficiency (fuel burn) and the type of fuel they can be run with.

That aside one of the most interesting developments for UPS systems is its energy storing battery set. In an uninterruptible power supply, the battery of choice has traditionally been a valve-regulated lead acid (VRLA) type. This type of lead acid battery is most suited to a standby power application where it is called on infrequently to discharge either completely or to cover a generating set power up.

New battery technologies including Lithium-ion (Li-ion) provide an alternative energy storage source and a range of new backup power configurations. This is because Lithium-ion batteries are more suited to fast charge/recharge cycles and are the choice for nearly all Local Energy Storage (LES) systems as well as electric vehicles and smart phones and tablets.

For more information on lithium-ion UPS in datacentres see: https://datacenterfrontier.com/white-paper/lithium-ion-batteries-ups-energy-storage/

Edge Computing and The Industrial Internet of Things (IIoT)

Whilst the demand for datacentres continues to grow there are now new drivers pushing organisations to install more sophisticated on-site server rooms and network facilities. Edge computing is one aspect of this which couple with the Internet of Things and Industrial Internet will lead to a greater deployment of smaller backup power solutions on company premises. Without this, such organisations could lose the competitive edge that will be required to compete in the next decade through efficient data capture, storage, analysis and sharing on a 24/7 basis and from anywhere in the world.

Coupled to this is the rising use of electric vehicles, which themselves rely on Li-ion battery technologies and at some point, a grid connection for recharging. In the not-to-distant future we could well see the Li-ion batteries in the electric vehicles in a car park being used to support the grid and the operation of your local datacentre and server room facilities.

Smart Energy in the Datacentres

As datacentres look to reduce their energy costs in the future and achieve a form of grid independence, facilities engineers and IT managers will look to adopt UPS systems with energy storage as part of a wider power protection and management strategy. This type of arrangement would be able to store electrical power generated locally via a renewable power source or could be drawn from the grid at off-peak rates. Coupled with energy efficiency drives the concept could help to lower overall electricity costs whilst helping to meet future power demands.

Critical power is just one element within a server room and datacentre environment that is going through a period of rapid change. It is not just the UPS system that is changing through the adoption of lithium UPS batteries. The complete concept of power planning is being revisited by many leading datacentre operators and new methodologies are being developed to keep servers running using the most efficient and environmentally friendly power sources.

Sometimes it is easy within a server room or data centre environment to take for granted the relative ease with which we can simply plug IT network servers and peripherals into a PDU outlet or UPS powered socket. These connections form the final element of what we term the ‘critical power’ path. They are the result of time spent planning the electrical circuits to ensure power availability whether there is a mains power supply failure or downstream overload or server fault condition.

The UPS system or uninterruptible power supply that we know today evolved from the oil industry and its need for backup power protection for computer operations in the 1960s. Today’s UPS systems provide a similar solution, but the world of backup power has changed dramatically since that period driven by a host of factors and technological developments.