Monday-Friday 9am-5pm Facebook Twitter 08000306838 sales@serverroomenvironments.co.uk
SRE uses cookies to improve the usability of this website. By continuing to use this site you are accepting the use of these cookies.
Find out more / Accept this notification X
We use cookies to ensure you get the best experience on our website.
More Info / Accept X
Home > Blog > Liquid-based Critical Cooling Systems For Data Centres 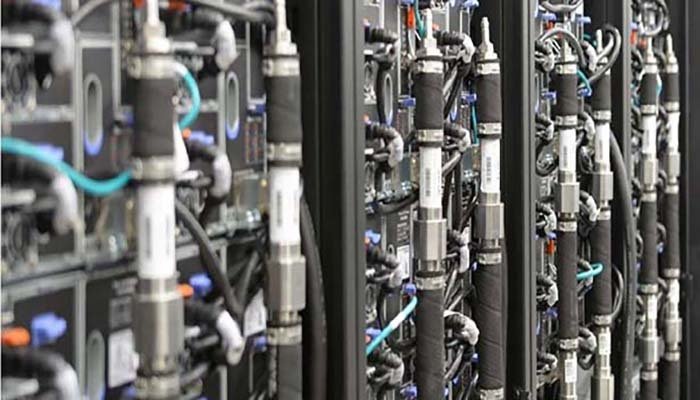 The world is not getting any cooler and in the data centre industry critical cooling is becoming one of the prime areas for energy saving. Unlike the uninterruptible power supplies used within a critical power path, which are already approaching their maximum available energy efficiency (>97% in on-line mode) critical cooling has a long way to go.

When we talk about cooling in the air conditioning world we differentiate between comfort and precision cooling. Comfort cooling is the type of cooling require within offices, retail and domestic environments. Precision cooling is the term of the cooling required within IT environments and is directly implemented to cool IT servers, network peripherals and their associated electronics.

In the data centre world, the rising costs of energy and growing demand for cooling or to be precise ‘critical cooling’ are driving innovation. Some estimates state that the amount of energy required for cooling within a typical datacentre is around 40% of all energy consumption or higher. When you consider the effect this has on any Power Usage Effectiveness (PUE) calculations, it is easy to understand why data centre operators are looking for more energy efficiency and innovative solutions.

History often presents its lessons well. In recent years there has been a resurgence in interest in liquid cooling and its application within data centre environments. The earliest concepts of liquid cooling actually date back to around the 1880s and since then there have been many steps in the innovation process.

Liquid cooling started to appear within data centre applications between 2005 and 2010 through the use of chilled server rack doors. This is till one of the principal forms of the cooling technique used today. Liquid cooling had actually surfaced around 1970s as a principal way to cool mainframe computers before being developed to meet the needs of high-end computing PCs and gaming computers.

It is therefore little surprise that liquid cooling has become the ‘go to’ method for high performance computing (HPC) environments and the types of computing found within hyperscale type data centre environments. Innovations now include direct contact and full immersion solutions with water-based cooling, becoming the most commonly accepted cooling solution and one of the eco-friendliest in terms of lowest impact on the environment.

The Benefits of Liquid Cooling

Aside from a lower environmental impact there are several benefits to using liquid-based critical cooling including:

Within a product life cycle there are the early adopters and innovators at one end and the ‘laggards’ at the other. Liquid based critical cooling does not suit the needs of everyone and there are some barriers to adoption. Principally, these include the need to reverse the IT trend which is based on air cooling and fans and a fear that introducing ‘liquids’ into an IT environment like a data centre or server room rack, introduces risk and the potential for downtime and catastrophic failure. Many sites also need to run a mixture of both air and liquid-cooled systems which an increase system maintenance complexity.

There are benefits to both critical cooling techniques as well as drawbacks. Air conditioner-based cooling is still the most widely adopted form of data centre and server room cooling. Liquid cooling techniques including ‘contact-based’ and ‘full-immersion’ systems for data centre and IT environments continue to evolve to cope with the cooling requirements for switches, spinning media and power supplies.

Liquid cooling has been used in data centres since the earliest mainframe computers. It is the use of the liquid cooling element which is getting nearer to the IT load in terms of rear cooled server rack doors and full immersion systems. Whist this bring greater cooling it also generates greater concerns and challenges to traditional thinking in terms of leakage. For this reason several liquid cooling system manufacturers have developed self-healing pipework.

Not all equipment needs liquid cooling, which whilst being more energy efficient may not in all circumstances be as cooling efficient in terms of removing heat as an air-based system. The choice is very much project dependent.

The Server Room Environments team includes HVAC engineering specialists and we work with manufacturers of both air and liquid cooling data centre cooling systems. Please contact us for a site survey or project review.

For an overview on data centre and server room cooling technologies see: https://journal.uptimeinstitute.com/a-look-at-data-center-cooling-technologies/

The datacentre industry is under immense pressure to reduce its energy usage and achieve a smaller carbon footprint. One of the biggest users of non-compute energy are the cooling solutions used within hyperscale down to medium and small-sized datacentres.

Heat is a form of ‘waste’ energy that results from the way the CPUs (central processing units) within a typical IT server work. In a server room or datacentre environment, managing ‘heat’ and keeping server racks cool is as critical an issue as ensuring the servers are protected from mains power supply failures. Excessive heat can age components and can lead to early system failures, erratic system operation and presents a potential fire risk both within a server cabinet and its local environment.