SRE uses cookies to improve the usability of this website. By continuing to use this site you are accepting the use of these cookies.
Find out more / Accept this notification X
We use cookies to ensure you get the best experience on our website.
More Info / Accept X
Home > Blog > Server Room Environmental Monitoring Systems 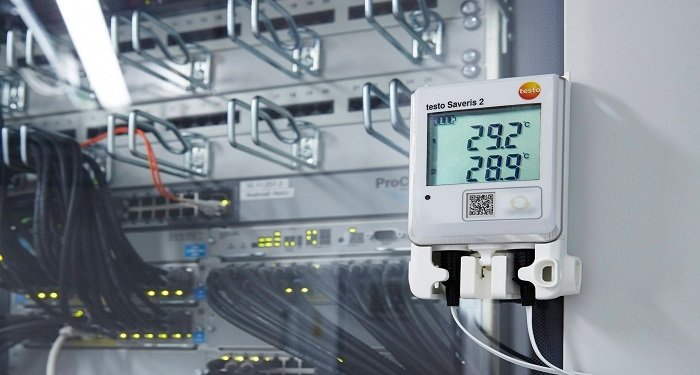 Whether you run a small server room, enterprise datacentre or colocation facility it is vital that you have an environmental monitoring system in place as part of your critical infrastructure. The information from an environmental monitoring system will help to keep the facility resilient, efficient and optimised. Such a system can also help to prevent downtime and damage to mission critical data and servers.

There are several aspects to monitor including:

Temperature and humidity control within a datacentre or server room environment is vital to the overall operational capabilities of the servers and associated IT and UPS equipment. Heat is generated by servers and especially the high capacity servers used for virtualisation and edge computing, this heat needs to be removed from the datacentre and server room environment and cool air pumped and distributed unto the room and server racks.

Heat is a sign of inefficiency in terms of energy usage and conservation. Servers generate heat due to the powerful processing and power supply electronics within them. Air is normally drawn into the front of a server by fans and exists via the rear. This allows for a clear air flow path and the use of hot-aisle and cold-aisle arrangements.

As the power requirements of a fully populated server rack can be up to 15-30kW, the amount of power at say 90% efficiency can be upwards of 10kW of heat to remove and cool. If the servers can overheat the potential for fire risk rises rapidly as does the risk of component and system failure.

Monitoring temperature in the server environment is important as any rise indicates a potential failure of the critical cooling system or a potential fire within a server cabinet. A key guideline is that all servers and racks should be operated within their defined inlet temperature ranges for optimal performance and to prevent unseen damage. Environmental monitors should therefore be used within the facility and server cabinets and preferably on the top, bottom and middle sections of the rack cabinets themselves. Room intake and discharge vents should also be temperature monitored. Temperature monitoring can also be important for UPS batteries which need an ambient of around 20-25°C to operate to their design life.

Humidity in a datacentre can lead to corrosion in the long term of metal surfaces and potentially components within the servers and UPS systems themselves. Hight humidity can also lead in the short term to short circuits as moisture builds up on electrically energised surfaces and allows dust and dirt within the facility to accumulate. The latter can also lead to potentially damaging static electricity discharges which can spark (fire risk) and/or lead to component damage and data corruption.

Humidity is generally referred to as Relative Humidity (RH) and is measured as a ratio of the moisture in a given sample to the maximum about of moisture that the sample could contain. In a datacentre or server room environment, the ASHRAE standard recommends a relative humidity of 60% and allows from 20-80% maximum relative humidity.

Water monitoring is important as any leak can indicate a local flood near or within the facility itself; such as a burst water pipe. Water could also leak from any local sprinkler system and if used as part of the cooling process i.e. liquid cooled rear panel server cabinet doors. Water sensors should be installed below water carrying pipes and on the raised access floor or under floor concrete plinth as required to detect moisture. Also, there is a combined effect of high humidity air creating pools of moisture if allowed to meet the right temperature surfaces within the datacentre or server room facility.

As well as deploying temperature, humidity and water sensors, static electricity level monitors can also be installed where a static build is considered a potential and likely hazard. This may be more appropriate for more humid and tropical climates or those with a high likely hood of dust build-up.

A good airflow has to be maintained to ensure the temperature remains within pre-specified limits by the air conditioning system. A weak airflow indicates either a potential blockage or failure of one of the cooling system components or a rise in humidity. As some air flow may be under a raised access floor or within trunking in a suspended ceiling, the actual cause of any restrictions or problems may not be immediately visible.

In terms of airflow monitoring, any recommended monitoring strategy depends on the size and design of the facility itself. The main server room could have a raised access floor, suspended ceiling and even an L-shaped room and/or sub-rooms. For monitoring airflow, sensors should be placed strategically to monitor the flow of air into racks and external to the racks themselves. Any changes in air pressure need to be investigated quickly to prevent heat build-up and a loss of electrical energy efficiency.

Airflow is measured in cubic feet per meter (CFM) and can be controlled by turning fan speeds up or down or shutdown cooling units that may not be required.

Every critical system within a server room or datacentre environment is powered from the local mains power supply, either directly or indirectly via an uninterruptible power supply and standby power generator. It is vital to monitor the mains power supply in terms of its availability, voltage, frequency and capacity to ensure critical systems remain operational during a power outage. Servers may be powered via a UPS system as a critical-type load but other essential and non-essential loads may be powered from a local standby power generator. Both the mains, UPS system and generator sets must be monitored to keep the data processing facility operational always and prevent overheating and fire hazards.

A smoke detection and fire suppression should be fitted in a server room, no matter what size and is mandatory in a datacentre environment. The purpose is to protect the servers and their environment as well as the people operating within it.

The issue with such systems is that they can rarely be tested except under simulated conditions. It is therefore vital to ensure such smoke detection and fire suppression systems are also connected to the principle environmental monitoring system.

Any environmental monitoring system installed should be configured to send out alarms messages and tested regularly. For co-location sites, such alarm messages should also be sent to client technicians and their teams who will also need to be alerted should an alarm condition occur. The alarm message can be voice, text SMS or emails and should require receipt notification.

The most important aspect aside from any environmental monitoring system is a documented procedure on how to respond to alarm conditions with suitable training and dry-runs for those people responsible for taking any actions.