Monday-Friday 9am-5pm Facebook Twitter 08000306838 sales@serverroomenvironments.co.uk
SRE uses cookies to improve the usability of this website. By continuing to use this site you are accepting the use of these cookies.
Find out more / Accept this notification X
We use cookies to ensure you get the best experience on our website.
More Info / Accept X
Home > Blog > How to Size a UPS System and Battery Runtime 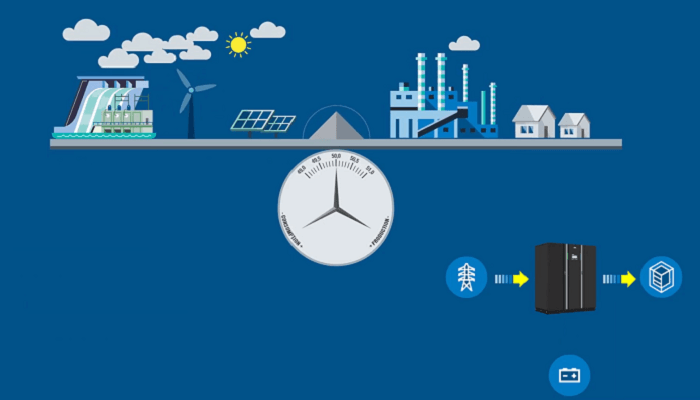 An uninterruptible power supply is a product designed to provide protection from mains borne power problems and a source of backup power when the mains power supply fails. For most people, the two main questions when deciding on the right UPS solution for their application is what size UPS do I need and how long a runtime is required.

Uninterruptible power supplies are available in three standard topologies. These are referred to as standby/off-line, line interactive and on-line. Each provides a different grade of power protection with standby/off-line being the lowest and on-line UPS mode the highest.

Regardless of the type of UPS, the system will be sized in either VA or Watts. VA is referred to as the ‘Apparent Power’ and is calculated by multiplying the total Amps (A)required by the load(s) multiplied by the Voltage (V) that the load(s) are plugged into.

The Apparent Power (VA) of a load is related to the Watts rating by a term referred to as the Power Factor (pF). Most UPS systems will be rated from 0.9 to 0.7 power factor and in this instance the Real Power (Watts) required by the load can be calculated by multiplying the VA by the power factor if known or adding up the Watts of the loads. The formula for calculating the Watts could be one of the following:

In the UK, the three phase mains power supply is 400Va 50Hz. The supply consists of three single phase supplies arranged at 120 electrical degrees apart. If we are looking at a three-phase load, then calculate the total VA or Watts per phase and then add these together.

Again, it is prudent to add 20% headroom for load growth. Three phase loads will require a 3phase UPS system and will be powered from a three phase mains power supply. The arrangement is often referred to as a 3/3 configuration. It is possible to have a 3/1 configuration where the supply to a single-phase load (1) is ‘spread’ across the three (3) phases of the mains power supply.

Once the total load has been calculated, the second question can be answered and that is ‘how long should the UPS provide backup power for’? An uninterruptible power supply is an energy storage device and the most common method for storing and delivering energy is a battery set. Some UPS systems for short duration runtimes (milliseconds) can be installed with supercapacitors as their energy storage component but the more traditional method is a battery.

The most installed battery, whether it is an uninterruptible power solution, emergency lighting, generator starter motor or even a security alarm panel, is a lead acid battery. Lead-acid technology has been around since 1860 and was invented by Gaston Planté. The battery technology since then has evolved to the type of modern battery we have today but the principle operation is essentially the same, lead plates and an electrolyte. Today’s lead-acid batteries are valve-regulated lead acid (VRLA) and maintenance free. Their typical design life is either 5 years or 10 years and you can expect a working life of 3-4 and 7-8 years respectively and in terms of complete charge/discharge cycles around 300-400.

The batteries for a UPS system are sized in Ampere-hours (Ah) and arranged into a battery string or set of battery strings to provide a set Ah at the DC voltage required by the UPS inverter. There is a lot more engineering to this and to reduce the need for battery UPS manufacturers will publish their data to show the runtime available for their UPS system at a set load.

For example, UPS manufacturer ‘A’ may state their 1kVA online UPS provides 7minutes at full load. Manufacturer ‘B’ may say 10minyes at 80% load. There is a bit of ‘specmanship’ and so it is useful to read the small print and find out if there are any caveats on the battery runtimes stated.

However, what must be remembered is that a lead acid battery has a non-linear discharge curve. The lower the load the longer the battery will provide power for. If the UPS has been sized correctly, with the 20% headroom, then the expected battery backup time will be longer. Some line interactive and most online UPS systems can also be installed with extended runtime packs to increase backup times from minutes to several hours.

How Much UPS Backup Time Do You Need?

The electrical supply industry uses the term ‘power outage’ to describe the loss of mains power. The electricity generation and supply industry in the UK is overseen by OFGEM who apply severe financial penalties to industry players when there is a power outage longer than 3minutes. Unless there is a severe power failure like the one in the UK in August 2019, most power outages last minutes rather than hours. It is also common for power outages to occur several times within a short space of time i.e. multiple short duration interruptions caused by the failure of a local substation or electrical distribution infrastructure and its automated rectification or from an overhead electrical storm and nearby lighting strikes.

For short duration power outages (or power cuts), most UPS system batteries are sized in terms of minutes and to last from 10-30minutes. This provides sufficient time to allow the UPS to ride through the mains power supply interruption or initiate a locally installed UPS shutdown software package and gracefully power down the local network server loads. For larger loads, like server rooms and datacentres, the facility may also have a local standby power generator which can automatically start and be up to full power within 1-2minutes of being initiated. The 10-30minute period here provides a safety window in case the generator does not start straight away due to a starter motor battery problem, open circuit breaker (from a maintenance visit) or air in the fuel supply lines.

The runtime for any UPS installation is therefore a function of the loads to be powered and the available energy sources, either battery or battery & local generator supply. Some sites also apply load shedding when the mains power supply fails. Critical loads remain powered but some essential and all non-essential loads are ‘dropped’. The reduced load on the UPS increase the runtime available from the stored energy.

Lithium batteries are revolutionising many aspects of modern life. Typical applications include mobile phones, tablets, and electric vehicles. Lithium batteries options are also available for some UPS types. Though they command a higher price than lead acid, there are advantages that can make their installation preferred for UPS installations.

Lithium-ion batteries are the preferred technology for local energy storage systems. These store off-peak energy from the local grid or on-site power generation (solar or wind turbines) for use as battery backup or to supply to the grid as part of a demand response and frequency stabilisation program.

Lithium UPS systems can also provide both functions if the UPS has a bidirectional rectifier/converter section. The concept is like that of Vehicle-two-Grid (V2G) power generation and can be thought of as UPS-two-Grid (UPS2G) supply. Eaton describes this as their EnergyAware and UPS-as-a-Reserve (UPSaaR) technology.

Sizing a UPS system is relatively straightforward whether it is for a single phase or three phase load and configuration. What is important is to identify all the critical, essential and non-essential loads and to identify those that have to be kept powered when there is a mains power supply interruption and for how long in order for the organisation to continue operations. Whilst most installations will be made with a lead acid battery set, there are alternative energy storage options including supercapacitors and lithium-ion batteries. Standby power generators can also be used to increase the support time of the UPS and provide several hours or even days of runtime.

Uninterruptible power supplies have several consumable parts of which the battery set is the costliest requiring replacement at least once or twice during its working life. What costs should you take into consideration when deciding whether to replace your UPS batteries or upgrade to a new UPS system?